So, finally I have uploaded all pics I took during yesterdays race. What can I say, for our team the race was not as it should be. Sam crashed hard in the first round because his chain broke at the end of the downhill section, he got a bike of one of the durch guys, thanks for your help man, unfortunately with the wrong pedal system, so I gave him my bike. With a massive backlog he tried his best but had to give up about 3 laps later. Nils also tried to make the best but the cobblestones and the uphill section made it a tough race for all riders. Even the 3 girls did an awesome job and fought until the end. 7 male riders made it to the finish line where Stefan Reimer of Fixedpott made it in a sprint decision as close as it only could end against Stefan Vis. I guess all participants had fun, for next year the course needs to be updated and now it’s time for Eurobike and Red Hook Barcelona. Pictures can be found here, I’m sure more will follow from all the guys around us if not already happened. 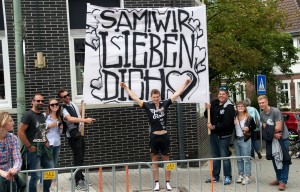